Cancelled trade shows and meetings are the harsh reality for convention centers across the country right now, but that hasn’t stopped many venues from turning their misfortune into charitable opportunities.

To help provide a little feel-good inspiration during this challenging time, read on to learn how events and venues impacted by COVID-19 are stepping up to provide immediate relief to those in-need in their local communities.

When COVID-19 virus concerns resulted in a March 5 order by the Ohio Department of Health prohibiting general spectators from attending the 200,000-person 2020 Arnold Sports Festival, the GCCC wanted to do something positive with more than a ton of mostly perishable food.

With many restaurants in Columbus donating leftover food to local charities, the GCCC opted to send its excess food to Nashville, which had suffered serious storm damage from a March 3 EF-4 tornado and related storms.

The GCCC’s Levy team members reached out to Mark Lloyd, Levy’s executive chef at Nissan Stadium in Nashville, who then connected them with Operation BBQ Relief to come up with a plan for delivering, preparing and serving the meals.

On the morning of March 6, a refrigerated truck and several GCCC chefs arrived at the Stadium, where more than 2,000 meals were prepared and served to storm victims and first responders the following evening.

“When the unique circumstances affecting the Arnold Sports Festival came to fruition, we were proud to be able to send excess food to assist Nashville residents impacted by true devastation while we focused our efforts on supporting the Arnold Sports Festival in its revised format,” explained GCCC General Manager John R. Page. “This special effort augments our catering partner’s existing charitable practice of providing food donations to food rescue locally throughout the year.”

In the face of events being postponed or cancelled, the Metro Toronto Convention Centre has also been accelerating its existing food donation efforts to support the less fortunate within the Toronto community.

MTCC employees teamed up to donate approximately 1,500 meals from cancelled events to local charity partners including Margaret’s Housing, Good Shepherd, The Scott Mission and organizations that help at-risk people of all ages struggling with poverty, disability and/or homelessness.

“This donation would not have been possible without the dedication of our staff who worked diligently to prepare food items for delivery,” said Lorenz Hassenstein, MTCC president and CEO. “This initiative is part of our ongoing commitment to donate leftover food from events that support our community.”

Centerplate’s culinary teams at convention centers throughout the U.S. – many of which already maintain active food donation programs – are helping facilities turn the crisis into an opportunity to provide support for the communities in which they serve. Here’s what several major venues have been doing since early March to make sure leftover food from cancelled events goes to those who need it most.

This facility worked with the Food Bank of Central and Eastern NC to donate 800 banquet-ready meals from two cancelled events to several local non-profits including the Pullen Memorial Baptist Church, the Raleigh Rescue Mission and Love Wins Community Engagement Center. 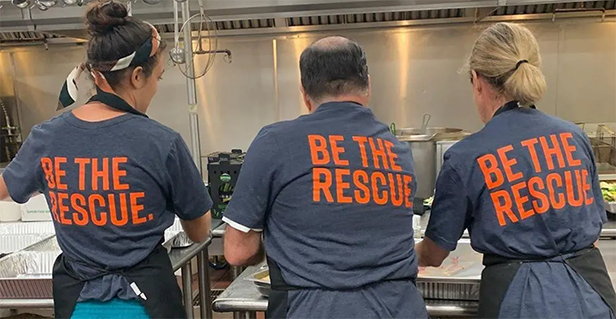 The venue donated excess, unopened food from cancelled meetings and galas to local charities via Food Rescue US, a platform that matches last-minute food donations with volunteers who then pick up and deliver the items to local charities or those facing food insecurity.

This effort includes 1,000 pounds of already prepped food from Relate, a global user conference produced by Zendesk that cancelled its March 3-5 conference for 2,300 people. The Relate team had already been working with MBCC’s culinary team on a strategy to reduce its food waste, so the gourmet meals already had a place to land.

To help promote the safety and well-being of its employees, OCC has developed a program to help full-time hourly employees who have been heavily impacted. During the week of March 16, the Centerplate Serves (community service effort) team, led by OCCC Executive Chef James Katurakes, rolled out an employee meal-packing event, which provided pre-packaged meal kits with up to $400 worth of groceries for full-time workers lacking the supplies they need.

The Centerplate team in Denver has donated three pallets of Food to We Don’t Waste, one of the largest food recovery organizations in Colorado. The facility also put together 150 care packages for its staff to take home to their families and friends.

Led by General Manager Roy Sheckles and Executive Chef David Skorka, the KBHCC donated about 5,000 pounds of food last week. The donations benefitted The Stewpot, which provides meals, casework services, children and youth programs and creative alternatives to Dallas residents experiencing homelessness and poverty, as well as to the City of Dallas Emergency Management Office and a mix of First Responder groups.

“Through close correspondence with local health departments and our global network of expert resources, we are implementing all the necessary protocols at each of the venues where we serve and giving back to the local community with prepared but unused food whenever we can,” said Paul Pettas, communications director for Centerplate. “We hope these donations will have a direct impact during these trying times.”

How Anaheim, Georgia Expo and Sahara Las Vegas Are Lending Helping Hands
In many ways, the COVID-19 pandemic has brought out the best in humanity, including those in the events industry. Over the past several weeks, more and more destinations,…
Lending a Helping Hand is the Heart and Soul of AFR Furniture Rental
Charity is an obligation, not an option, according to Jerry Hellmann, co-CEO of AFR Furniture Rental, a national furniture rental company that provides furnishings for homes…
International Housewares Association and Fern Expo Lend a Hand to Help Hurricane Florence Victims
Never say the trade show industry isn’t comprised of plenty of generous, kind-hearted people who are ready to lend a hand to those in need, especially in the face of natural…
Event, Exhibit and Airline Companies Do Their Part to Help Those in Need
This article is the first in a series that we will be running throughout the holiday season shining a bright, well-deserved spotlight on companies that are #GivingBack. Is…
How a Green Team Can Help You Plan More Sustainable Events
Sustainable practices are fast becoming a must for events. According to the Eventbrite 2020 Event Trends report, 59 percent of North American event professionals are taking…
It’s Game Time! How to Harness a March Madness Approach to Event Apps
With March Madness right around the corner, I couldn’t help but think about how the teams that get to The Big Dance have just the right mix of game-winning strategies – sort…