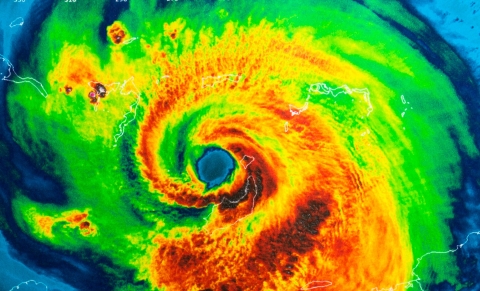 Packing maximum sustained winds of 155 mph, H​urricane Ian made landfall in southwest Florida on Sept. 28 as one of the region’s most intense hurricanes on record.

As the powerful storm barrelled toward the Gulf Coast, Gov. Ron DeSantis declared a state of emergency for the entire state of Florida, leading to major disruptions in flights and cruise lines, port and school closures and statewide evacuation orders.

And with Florida serving as a highly popular destination for meetings, trade shows and events, that obviously spelled numerous event cancellations across the Sunshine State.

Here are just a few major events that have cancelled or postponed.

Produced by the Association for the Advancement of Blood & Biotherapies (AABB), which represents individuals and institutions involved the transfusion medicine and biotherapies fields, the AABB Annual Meeting converges physicians, nurses, scientists, researchers, administrators, medical technologists and other health care providers.

Set for Oct. 1-4 at the Orange County Convention Center in Orlando, the latest in-person edition was cancelled on Sept. 26 by AABB board members in an effort not only to protect the health and safety of its community, but to also provide sufficient time for attendees to cancel travel and make alternative plans.

Said AABB officials in a statement:

“First and foremost, our thoughts are with residents and members of the AABB community throughout Florida who may be most affected by this storm. We encourage you to do everything you can to keep yourselves, your loved ones and your neighborhoods safe. We further encourage all members of the AABB community—especially those in close proximity to the affected areas—to make an appointment to donate blood if you are eligible and able. If this storm reaches its full potential, your donation could help save lives during this critical time.”

They continued, “We are completely devastated to make this announcement. After two years of virtual annual meetings and nearly a full year planning for a return to an in-person gathering, we have been excited beyond words to bring the community together again. We deeply appreciate the many AABB member volunteers, vendor partners and AABB staff who have worked tirelessly, especially throughout the past several weeks, to make this meeting a success for thousands of participants; the tremendous speakers and panelists who were lined up to lead us expertly through each session; and our exhibitors and vendors who contribute so much to the overall experience and value of the meeting.”

Organization officials added that steps are already being taken to expand AABB’s previously planned virtual meeting for Nov. 6-7 and that in-person attendees would be able to transfer their registration to the virtual event as well as receive a partial refund. Conversations with exhibitors and sponsors are also ongoing.

As North America’s largest technical trade event for recreation marine industry professionals, the International BoatBuilders’ Exhibition & Conference (IBEX) was set to kick off Sept. 27-29 at the Tampa Convention Center. But with the increasing probability that Ian would substantially impact the Tampa region, the National Marine Manufacturers Association and RAI Amsterdam, IBEX’s co-owners and producers, were forced to make the tough call to cancel this year’s show.

“Based on the weather reports from [the National Oceanic and Atmospheric Administration] and consultation with the City of Tampa, Tampa Convention Center and other stakeholders, the imminent arrival and uncertain nature of the storm forces us to cancel IBEX 2022,” said IBEX officials in a statement. “From Governor DeSantis’ recent press conference, it is clear that it is neither safe nor advisable to ask our exhibitors, staff and visitors to travel to or be in Tampa, Fla., this week. Thank you for your patience and understanding as we share this difficult decision.”

As the largest global gathering of DevOps (software development and operations) thought leaders, practitioners, contributors and individuals dedicated to shaping the future of modern software delivery, DevOps World 2022 was gearing up to return to a face-to-face format Sept. 27-29 at the Orlando World Center Marriott.

According to show officials, the conference will pivot to a virtual format, and details regarding dates and logistics will be released in the coming weeks.

“The DevOps World team has been closely following the state, local and federal guidance on Tropical Storm Ian,” event organizers said in a statement. “The safety of all attendees is our primary consideration. Therefore, out of an abundance of caution, we have decided to postpone this week’s on-site event at Orlando World Center Marriott.”

They continued, “The decision was not made lightly, but we firmly believe this is the best course of action given the information we have today. In the coming weeks, we will share details on dates and logistics for a rescheduled, virtual edition of DevOps World 2022. As we transition our efforts to create an exceptional virtual experience, our thoughts are with the people and communities in the path of this storm.”

According to show officials, all registrants for the 2022 Orlando event will have their registration automatically carried over to DevOps World 2023, which will take place in September, although the venue and dates have not yet been announced.

This is a developing story. If your organization would like to notify TSNN about a cancelled or postponed event due to Hurricane Ian or an event venue affected by the storm, please email Lori Tenny at ltenny@tsnn.com or Lisa Plummer Savas at lpsavas@tsnn.com.