SOURCING at MAGIC to Debut New African Pavilion, WWDMAGIC Gets a Revamp 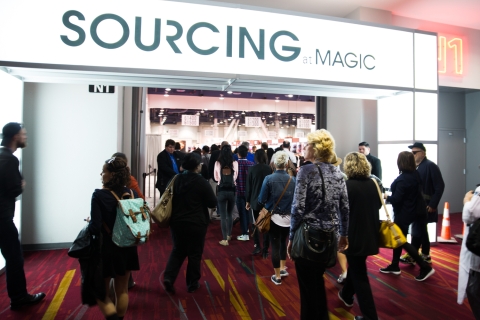 As the largest biannual U.S. trade show for the global retail fashion industry, MAGIC is known for staying ahead of trends, while continually revamping, expanding and refining its showfloor offerings.

Its upcoming event, set for Feb. 20-23 at the Las Vegas Convention Center and the Mandalay Bay Convention Center, will be no exception as it unveils a new African Pavilion and a refreshed women’s fashion showcase.

Owned and produced by UBM Fashion Group, the massive show attracts tens of thousands of attendees from more than 80 countries to Las Vegas every February and August. In 2015 alone, the event boasted 72,651 attendees and 5,385 exhibitors occupying 998,845 net square feet of exhibition space.

As one of 13 showfloor categories featuring the latest in apparel, footwear, accessories, SOURCING at MAGIC is the only show segment dedicated to the global supply chain.

With its finger firmly on the pulse of trends in manufacturing, SOURCING at MAGIC is set to launch a new African Pavilion featuring 11 countries including Kenya, Ethiopia, Madagascar, Mauritius, Nigeria, Rwanda, South Africa, Lesotho, Ghana, Cameroon and Uganda.

Forty factories are expected to span 5,700 sq. ft. of exhibit space in the Pavilion, a 68 and 43 percent increase in square footage and participation, respectively, compared to the February 2016 event, according to Christopher Griffin, SOURCING at MAGIC president.

“What’s new and different is over the years we will do one of three things as we lead into an upcoming show – either a focused country, a focused region or a focused category,” Griffin said.

He added, “Kenya and Ethiopia had both expressed a desire to be the focus country, (so) made more sense to have a focused region of Africa for the February show with a spotlight on Kenya.”

The timing of the new Pavilion also is no accident, given the growing interest in African countries as a major sourcing destination and the recent renewal of the African Growth and Opportunity Act (AGOA) through 2025, which allows certain countries in sub-Saharan Africa duty-free access to the U.S. market.

As a great solution for cost-conscious retailers looking to produce high-quality apparel, the continent has quickly gained traction as a region of opportunity for many apparel brands. Add in the uncertainty of the global trade landscape, and the buzz around Africa shows no signs of slowing down, Griffin said.

“We actually had a focus on Africa about 4-5 years ago, but in the world of sourcing a lot can change in four or five years,” Griffin said.

He added, “We went with what looked like an Asia pivot with the Trans-Pacific Partnership (TPP) to perhaps now a pivot to pre-trade countries where those agreements don’t appear to be in jeopardy, and certainly AGOA in Africa would qualify.”

The African Pavilion will also offer a couple of special seminars, including “Focus On Africa: Challenges and Opportunities” that will highlight the nuts, bolts and opportunities of doing business in the region, and “Post Election: Trump and Trade,” which will explore the new administration’s impacts on various free trade agreements and international trade relationships, and how they could affect the fashion industry.

Additional new features will include an African-inspired fashion gallery, an African designers showcase and special events inside the Pavilion’s Africa Lounge.

With countries showing signs of shifting more production into the African region, Griffin foresees this could spell big growth for the new Pavilion going forward.

“There’s a strong commitment in the U.S. with U.S. Aid, AGOA, and a lot of NGOs in Africa and Sub-Saharan Africa that are working to help promote trade,” Griffin said. “A lot of people for years were saying the Africa was the next China and then it sort of cooled off, but now people are feeling like it’s their second chance and they shouldn’t blow it.”

He continued, “I think we could eventually see our Africa Pavilion become fairly significant, with more than 100 booths and 10,000 sq. ft.”

Meanwhile, another show category, WWDMAGIC, will debut a new look and feel at the upcoming event.

As the largest showcase of women’s apparel and accessories in the fashion industry, the category’s new, more streamlined aesthetic will feature modern, colorful and eclectic designs and initiatives, including 8-ft. walls, inspiring signage, redesigned lounges and sleek design finishes.

“The fashion retail landscape is ever-evolving and we wanted the WWDMAGIC experience to reflect some of those changes,” said Tom Nastos, president of women’s fashion for UBM Fashion Group. “To that end, our February showcase will begin to touch all senses while addressing current industry trends through creative and experiential initiatives.”

He continued, “We want our brands and retailers to connect in a beautiful environment that will benefit both and we are thrilled with our new look and feel. This is just the start.”

Along with the redesigned showfloor, new features will include a modern trend presentation, a blogger social house and a DJ lounge.

SOURCING at MAGIC to Debut Global Digital Trade Event in Las Vegas This Fall
There will be a new digital feature at this year’s SOURCING at MAGIC, Informa Markets Fashion’s annual sourcing and supply chain event serving the fashion apparel, footwear…
President Trump and Trade to Be Discussed at SOURCING at MAGIC
In response to the retail fashion industry’s growing concern about how President Trump’s administration may impact global trade and apparel manufacturing, SOURCING at MAGIC…
New Labelexpo Show to Debut in Mexico in 2021
The Labelexpo Global Series of trade shows for the label and package printing industry is launching a new major show serving the Latin American market: Labelexpo Mexico,  set…
JCK Revamps, Moves into New Mandalay Bay Convention Center Space
JCK Las Vegas, the flagship show of Jewelry Market Week, began its 2016 show June 3 with a revamped shopping experience utilizing the new expansion of the Mandalay Bay…
Albany Debuts New Meetings and Convention Facility
The city of Albany has unveiled the Albany Capitol Center, a $78.5 million, state-of-the-art meetings and convention facility. As the newest addition to the city’s downtown…
20 New Biotechnology Products Debut at INTERPHEX 2017
By Elizabeth Johnson Leading pharmaceutical and biotechnology companies chose INTERPHEX 2017 to launch their newest products, with 20 companies debuting new technology at the…