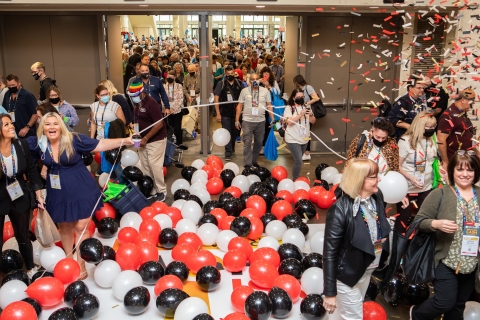 The Advertising Specialty Institute (ASI) kicked off 2022 on an overwhelmingly positive note, with its hotly anticipated ASI Show Orlando drawing 3,000 supplier and distributor professionals who were excited to reunite and make valuable in-person connections.

Held Jan. 4-6 at the Orange County Convention Center (OCCC), ASI Show Orlando featured a busy showfloor with more than 500 booths spotlighting the top in-stock products of 2022 as well as education, a powerful panel discussion and numerous networking opportunities. The show attracted distributors from across the country, including 800 from Florida. In addition, 288 female-owned and 107 minority-owned companies were in attendance.

“ASI is thrilled to once again lead the way with the promo industry’s first, best trade show of 2022,” said Timothy M. Andrews, president and CEO of ASI, the largest membership organization in the $20.7 billion promotional products industry. “From the moment the balloons dropped, distributors rushed in, eager to meet in person with their trusted supplier partners, and the action, deal-making and sorely missed human connections continued non-stop over three very productive days.”

According to ASI’s 2021 State and Regional Sales Report, the South remains the most robust region in the U.S. for promo sales, thanks to the promo powerhouses of Texas and Florida, which suffered more modest declines during the pandemic slowdown and generated more than $4 billion in total 2020 promo sales, with Florida alone generating $1.3 billion.

“On behalf of the OCCC, we are delighted to have ASI Show and their vast network of marketing and advertising professionals at the ‘Center of Hospitality’ as we launch into a very active and robust 2022,” said Mark Tester, executive director of the OCCC.

Attendees who made the trip to ASI welcomed the in-person connection with open arms and expressed enthusiasm about the show.

Exhibitor Noelle Leverentz, territory sales manager at Top 40 Supplier Hit Promotional Products, thought it was a great event all around and was happy with the turnout.

“It was so good to meet with my customers again in person, and it was phenomenal that so many of them attended,” she said. “We came in knowing that the overall show attendance might be down but were still excited and pleased with the actual turnout—the show delivered.”

Distributor Patti Donnelly, vice president of sales and marketing at SunCoast Print & Promotions, has attended ASI shows for years and was thrilled to finally attend a live show after more than a year of cancellations.

“This is exactly what I needed to help build my business back up, find inspiration and new ideas, and connect with new and old exhibitors,” Donnelly said.

Distributor Randy Eubanks, owner and vice president of sales at Suncoast Marketing, was happy that after nearly two years of enduring slowdowns caused by the double whammy of COVID and recent supply chain struggles, he was able to engage with suppliers in Orlando, with ASI estimating that over 70% of Top 40 Suppliers exhibited.

“I’m really happy to be back and found it to be really helpful and educational,” he said. “I missed seeing things in person. Networking online just isn’t the same.”

Suppliers were equally excited to engage with distributors.

“I had a great first day here at ASI Show,” said Sandy Nichols, channel sales manager at COOLiBAR. “It’s the first show of the year, and it was packed! Great people, great conversations and great connections—We are so happy to be back here in person.”

“It’s been fantastic,” she said. “People are so excited to be back, and the energy has been great. There’s something to be said about being face-to-face that you can’t get virtually or over the phone, and these connections we are making are solid and memorable ones.”

ASI Show offered familiar favorites such as an Education Day with 18 tracks and several networking receptions, along with an on-stage discussion between three Counselor Top 40 Distributors and a Counselor Top 40 Supplier sharing strategies for thriving in the coming year.

“To hear about their recent struggles and how they overcame them by being as honest and open with their customers was a huge takeaway for me,” said Chad Park, sales executive at ORCA Promo. “I was excited to hear about the potential for success in this industry, and I’m looking forward to getting younger people like myself—I’m 28—involved to have fun with it and to make money!”

On the final exhibit day, ASI Product Editor Joe Haley hosted a live Promo Showcase, featuring Orlando’s most buzzworthy products, along with winning ideas for 2022 promotional campaigns. According to ASI surveys, 96% of attendees report that live events are critical to product sourcing.

“These product showcases are always informative and enjoyable,” said Deirdra Rogers, senior account executive at Kritzer Marketing. “I find new ideas for my customers, and it inspires creative thinking and new directions and applications on how to sell the products. I really liked the new packaging idea that was presented today.”

According to ASI officials, the safety and well-being of exhibitors, attendees and the community will continue to be a top priority at all of the organization’s shows, with ASI working closely with convention centers and all contracted hotels to ensure precautionary measures are in place. Safety measures will be updated as each show nears based on current CDC recommendations and any government, state and federal mandates, they added.

Expo! Expo! Energizes the Trade Show Industry
The show for shows lived up to its billing, even if it looked different from past years. Expo! Expo!, International Association of Exhibitions and Events’ annual gathering,…
JCK Readies to Reunite the Jewelry Industry
Sarin Bachmann, group vice president of Reed Jewelry Group, is ready to meet like it’s 2019. At JCK & Luxury, returning to The Venetian Resort & Sands Expo in Las…
IBTM World 2021 Reunited the Events Industry In Barcelona
As the first face-to-face IBTM portfolio event to take place in two years, IBTM World once again succeeded in reuniting the global meeting, incentives, conference and events…
National Restaurant Association Show Reunites Foodservice Industry With Triumphant 2022 Return
More than 51,000 foodservice professionals flocked to Chicago's McCormick Place May 21-24 for the first time since 2019 to happily reconnect in person and indulge in this…
How to Energize, Excite and Engage Values-Driven Event Audiences
Today’s event attendees are less driven by product than they are by purpose. For instance, 85% of people around the world are making more sustainable purchases. As a result,…
5 Steps to Trade Show Success
Tradeshows are a great form of marketing - you’re visible in front of hundreds to thousands of people and your branding and positioning are obvious. Although they are a great…