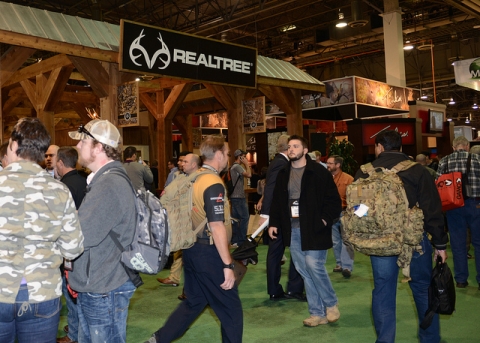 The Shooting, Hunting and Outdoor Trade Show broke attendance records once again this year at the Sands Expo & Convention Center in Las Vegas.

The SHOT Show, owned and sponsored by the National Shooting Sports Foundation, attracted a record overall attendance of 62,371, including a new high for buyers and more than 2,000 media representatives.

There also were 1,600-plus exhibitors who filled booth space that covered 630,000 net square feet. The show, which is a trade-only event, attracted industry professionals from all 50 states and 100 countries.

With the show taking place during a time of heightened national attention about firearms ownership and potential legislation, NSSF President and CEO Steve Sanetti addressed more than 1,800 industry leaders at the State of the Industry Dinner.

“I don’t think many of those who disagree with what we do appreciate the many things we’ve done to advocate personal responsibility with firearms,” Sanetti said.

He added, “Ours is a responsible industry that makes and sells lawful products to law-abiding citizens. They in turn exercise their constitutional right to own, use and enjoy firearms safely and responsibly for all lawful purposes.”

The busy showfloor reflected the $4.1 billion firearms and ammunition industry, which “supports many small businesses and helps preserve the more than 200,000 jobs associated with the shooting sports,” according to NSSF officials.

In addition, the organization added significantly to its membership ranks at the show, pushing its overall total of supporters to more than 8,300, they added.

“The SHOT Show is the springboard for every new product that we introduce each year,” said Exhibitor Frank Devlin of Otis Technology.

He added, “It gives industry the opportunity to see our new products and allows us to get feedback from them to know that we are heading in the right direction.”

In conjunction with the SHOT Show, NSSF sponsored the PGA Charities’ Birdies for the Brave golf tournament that raised $100,000 for groups that provide support for injured armed service veterans.