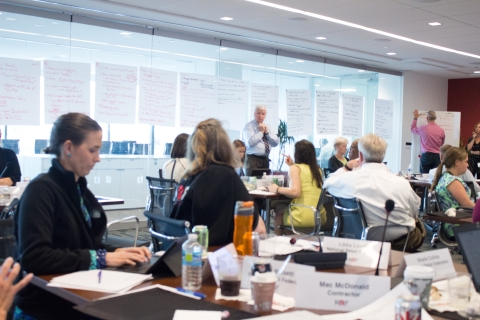 Once a year, National Retail Federation staff members and key stakeholders gather together and brainstorm on how they can not only solve challenges they have with their trade shows – Retail’s BIG Show and Shop.org Annual Summit, but also talk about how to make them a more personal experience for attendees.

They call the sessions “Blue Sky Meetings”, according to Eric Olsen, NRF’s vice president of education strategies, at which they discuss “anything under the blue sky you could think of” in regards to improving the shows.

“We get an agenda beforehand, so that we’re prepared on what the goals are,” he added.

There are approximately 24 attendees at the meeting who are from different departments, such as conferences, registration, content and marketing, to name a few.

“Basically, any component of the show you can think of,” Olsen said.

This year’s meeting also had a facilitator who Olsen worked with beforehand to talk through what outcomes they hoped to accomplish during the meeting.

Once at the meeting, there were large group discussions, as well as smaller groups that were broken into “pods” at which certain subjects were tackled.

Afterwards, the ideas generated by the smaller groups were written on Post-it notes and shared with the group.

“There is no bad idea, until the end when things start coming off,” Olsen said.

The “Blue Sky Meetings” have been going on for a few years now, and Susan Newman, NRF’s vice president of conferences, said there have been several ideas generated in the meeting that have been implemented at the show.

“We faced a lot of challenges with the size of our audience and the size of the venue,” she added.

One big complaint that often came back about the show was the lack of seating. At the “Blue Sky” meetings they took on the challenge to solve this issue and, as a result, shrunk the registration area, as well as made a lounge area that included charging stations and lots of places to sit.

Attendees also wanted more opportunities to network, so the team brainstormed and came up with the idea of having retail ‘Meet-ups’ around the show.

The mobile app was another topic discussed at the meeting, mainly getting more of what the attendees needed on it to make the show a successful experience for them.

The food court also was a challenge, Newman said, so they have discussed more creative options, such as bringing in food trucks.

In addition, they wanted to figure out ways that a big show in a big city could still feel like an intimate experience through branding in hotels, cabs and around New York.

“We even passed out hot chocolate as bus stops,” Newman said.

The “Blue Sky Meetings” are held once a year, usually nine months out from the annual show.

On the content side, they came up with a new format for the keynotes that was inspired by TED Talks, Olsen said. Called “Fast Tracks”, the keynotes feature up and coming companies in retail doing things differently, he added.

“We always reevaluate (the shows) every year,” Newman said. “It’s all about the customer experience, to make them feel more appreciated and that we know who they are.”

National Retail Federation Grows Retail’s BIG Show the “Right Way”
The National Retail Federation’s annual show for the industry – Retail’s BIG Show – definitely takes after its moniker; The show IS big, in fact this year’s, which was held…
Q3 CEIR Index Drops .07 Percent; Consumer, Travel and Retail Shows Challenged
Led by a third-quarter drop in Real Revenues of 3 percent, compared with the same quarter in 2016, the Center for Exhibition Industry Research reports that performance of the…
3 Challenges Women Face in Advancing Their Event Tech Careers
Background The recent controversy at Google underscores a persistent problem in the technology sector: Women remain significantly underrepresented at all levels. The results…
4 Ways to Create a Memorable Trade Show Booth
Standing out at trade shows when there are dozens of trade show booths trying to grab the attendee’s attention is easier said than done. The most memorable exhibits are those…
How to Create a Dynamic Trade Show Experience
If you're going to spend the money to get space for your company at a trade show - not to mention paying for people to man the booth or losing valuable employees who could be…
Creating a Successful Budget for Trade Show Exhibiting
Successful trade show exhibitions are those earning a quantifiable return on the investment. If you want that successful ROI, it requires lots of careful planning. Front and…