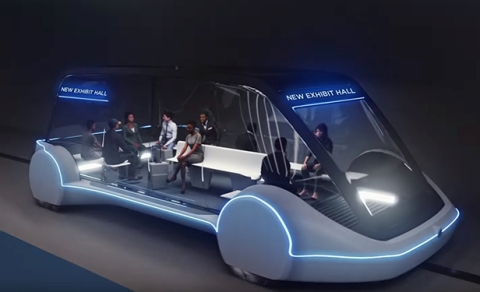 Last week, the Las Vegas Convention and Visitors Authority Board of Directors voted on a proposal that could very well revolutionize the future of transportation in Southern Nevada.

They selected Elon Musk’s The Boring Company to design, construct and operate a people mover for Las Vegas Convention Center. The project would entail a loop of underground express-route tunnels that could carry passengers in high-speed autonomous electric vehicles and have potential to connect LVCC to Downtown Las Vegas, the Las Vegas Boulevard Resort Corridor, McCarran International Airport and beyond.

“The selection of The Boring Company for the Las Vegas Convention Center’s on-property, guest transportation solution leads the way to the evolution of transportation overall in Southern Nevada,” said Steve Hill, LVCVA president and CEO.

He continued, “Our destination thrives on innovation and reinvention, and The Boring Company’s concept allows us to continue providing the world-class experience our guests and clients have come to expect and move people in an efficient and cost-effective manner with advanced technology.”

Currently undergoing a $935 million expansion, the LVCC will span 200 acres when complete in time for CES in 2021, with on-foot conventioneers facing two miles of walking from end-to-end. Thus, the need for an on-property guest transportation solution is a pressing one, according to LVCVA officials.

“Las Vegas is a high-energy, high-technology destination equipped to welcome the world, and we are excited to deliver a world-class mass transit system that will help visitors efficiently navigate the city’s many offerings,” said Steve Davis, president of The Boring Company.”

He added, “Upon approval, it can be in use by Las Vegas Convention Center guests within one year, supporting the LVCVA’s expansion timeline.”

The Boring Company is known as a leader in innovative transportation technology. Its projects include a research and development test tunnel in Hawthorne, Ca., which represents a fully operational 1.14-mile loop system costing less than $10 million per mile including internal tunnel infrastructure.

According to the proposal, the Las Vegas underground loop system will offer reduced costs, less disruption to pedestrian and vehicle traffic, and faster construction time than traditional ground or above-ground options.

The loop will be designed to meet the full spectrum of ridership needs, including demands from future expansions, with a potential capacity of up to 11,000 passengers per hour. The system’s cost is estimated between $35 million and $55 million depending on route, number and size of stations.

Next, The Boring Company and LVCVA will determine the specific design, construction and operational plans and then negotiate a contract for the LVCVA Board’s final approval in a subsequent meeting by June of this year.

“Las Vegas has maintained its reputation as a leading travel destination because we are driven by innovation and hospitality,” Hill said. “This project is an example of how our leading principles can create an experience benefitting our community and valued visitors.”