As the heart of South Padre Island’s meeting and event business, the South Padre Island Convention Center is accustomed to hosting an array of year-round corporate and consumer events. These range from fishing tournaments to quilt shows to college basketball tournaments.

Tourists and event groups alike are drawn to the island for obvious reasons. Situated on the coastal tip of Texas, along the southern coast of the Gulf of Mexico, the barrier island destination boasts 34 miles of white sand beaches, clear emerald waters and 300 days of sunshine per year.

But during the recent polar vortex that slammed the Lone Star State with record freezing temperatures that proved too much for the state’s power grid to handle, the facility was converted into a temporary rescue sanctuary for 5,300 endangered sea turtles.

On Valentine’s Day, volunteers and staff from South Padre’s Sea Turtle, Inc., which has been rescuing and rehabilitating sick and injured sea turtles for more than four decades on the island, began scouring the shoreline on foot and by boat, working to save as many sea turtles from the life-threatening cold as possible.

The creatures had fallen victim to a condition called a “cold stun,” in which their body temperatures fall so low that they’re virtually paralyzed and unable to swim, eat or hold their heads above water, making them susceptible to drowning. 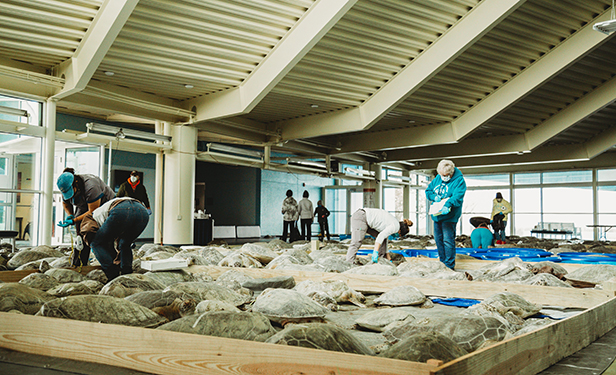 “This was the single largest cold stun event in recorded history, and ours is the only organization that’s ever managed something this big,” explained Sea Turtle, Inc. Executive Director Wendy Knight. “We handle somewhere between 200-500 cold stuns every single year, but more than 5,000 is unheard of.”

She continued: “We had lost power and were on the brink of having a real tragedy, not only with the cold-stunned turtles, but we also had a full hospital of patients. And then we have hundreds and hundreds of pounds of turtles that live in a 350,000-gallon area…it got critical and could’ve been catastrophic.”

With the rescue facility quickly filling up with afflicted turtles, Knight quickly turned to the kind-hearted folks at the neighboring City of South Padre Island Convention & Visitors Bureau. Director Ed Caum and his team not only agreed to immediately open up the SPCC’s 45,000 square feet of space to the effort, but also jumped in to lend a hand.

“There was zero hesitation, and within a couple of hours we were piling turtles up at the convention center,” Knight explained. “They didn’t just [give us] the keys and say, ‘hope it works out.’ They were in it with us trying to work through the logistics, solving problems and doing it on the fly. They went out and got wood, we found hammers and screwdrivers, and together we built makeshift containers and put tarps on them.”

Soon other local partners stepped in to help with the massive operation, including SpaceX, which brought in generators to restore power and heat to the convention center and the rescue facility. SpaceX has a launch facility on the island.

The turtles were kept safe from the chill for several days at the convention venue, warming up and recovering their strength under the watchful eyes of rescue staff and volunteers before being returned to the water. So far, 2,200 have been released to the sea.

By Feb. 22, the convention center had been cleared of turtles, the remainder of which are currently being cared for at Sea Turtle, Inc. until they’re fully rehabilitated and ready to be released. Although life on South Padre Island is slowly getting back to normal, Knight admitted she’s still reeling from the magnitude of what she and her team experienced. She said she looks forward to partnering with the CVB and convention center again soon, but under more pleasant circumstances.

“If I were planning an event, this would certainly be the convention center that I would [choose] — they went above and beyond, and they were amazing partners,” Knight said. “I’m super excited that we’ve already released more than 2,000 of the turtles, which is proof positive of the power of a community that really cares about each other. I couldn’t be more pleased by how it all turned out.”

South Padre Island CVB offers Eco-Tours as part of its meeting packages that include back operations visits of Sea Turtle, Inc. as well as other sustainability-oriented teambuilding and volunteer opportunities. Learn more here.

To learn more and to donate to Sea Turtle, Inc., go here.

Staff Training Helps Save a Life at Pasadena Convention Center
It was a typical busy day at the Pasadena Convention Center in October when public safety officers Zabrina Patterson and Max Pitpan heard frantic calls for help over their…
Centerplate Serves Thousands at San Diego Convention Center’s Homeless Shelter
While some major convention centers transformed into temporary medical relief centers as the pandemic took hold in early spring, one large venue has made the most of its…
How to Save Money at Trade Shows
When done properly, trade shows usually justify the cost and help to generate qualified leads that turn into new sales.  However, as with any marketing activities, you…
Helping Its Community Is a Year-Round Effort for the San Diego Convention Center
While many exhibition venues may choose the holiday season to carry out acts of service that help their local communities, the San Diego Convention Center has made corporate…
Sustainability Check-In: How U.S. Convention Centers are Getting Greener
Implementing sustainable practices isn’t just good for the environment, it’s also good for business, as many convention centers have discovered. According to the 2017 Green…
How TCF Center, Caesars, LA Convention Center and More Are Getting Greener
Several hotel brands and convention centers are jumping on the green bandwagon to help the environment and people in need through an array of sustainability and CSR…