IAEE Selects Don Pazour as 2018 Legend of the Industry 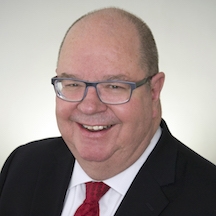 The International Association of Exhibitions and Events selected Don Pazour as its 2018 Legend of the Industry.

He will be honored during this year’s Krakoff Leadership Institute (KLI) Aug. 5-6 at the Savannah International Trade & Convention Center in Savannah, Ga.

The KLI Legend of the Industry is selected from IAEE members whose contributions, innovation and leadership have been truly unique and remarkable.

An informal setting then allows each KLI participant face-to-face interaction with this industry leader.

Don Pazour thrives on celebrating and supporting others’ success. He believes that great business events and trade shows are built around the needs of the communities they serve.

As CEO of Access Intelligence LLC and before that, a U.S. division of UBM, Pazour has led scores of acquisitions to build robust trade show portfolios.

He also supported and sponsored many executives at the companies he has managed, launched and innovated, driving their events to great levels of success.

In all of these cases, the key to his success was backing and collaborating with great leaders that understood their customers’ information and commercial needs.

Pazour began his media career as an editor of a mining magazine and found his love for face-to-face events through the launch of a mining summit held in Taxco, Mexico, which drew attendees from 34 countries.

Being allowed by his managers to take that risk and deliver a great community event was to be emulated through his support and willingness to risk failure with his own future employees.

He continued to learn from many of the entrepreneurs who, after selling their businesses, worked alongside him to integrate those events into a larger organization.

Pazour believes every community has its own personality and culture, which serve as the core around which best industry practices can be applied to create more value for both the attendee and exhibitor. He sees his main responsibility as putting leaders in place that understand the communities they serve, and are passionate about delivering awesome and profitable experiences for their customers.

In addition to his involvement in IAEE, Pazour is a past chairman and member of the Society of Independent Show Organizers (SISO) Board of Directors and past vice-chair and former Board member of the Center for Exhibition Industry Research (CEIR).

“My philosophy has always been one of collaboration and support with my fellow colleagues, and I have been fortunate to work with industry leaders who have inspired me throughout my career,” Pazour said.

He added, “I am both honored and humbled to be considered among them, and look forward to sharing ideas at the KLI Dinner.”

The IAEE Krakoff Leadership Institute brings together individuals interested in learning more about themselves so they can get involved and become effective strategists, contributors, facilitators and innovators.