At IMTS, Technology is Their Middle Name 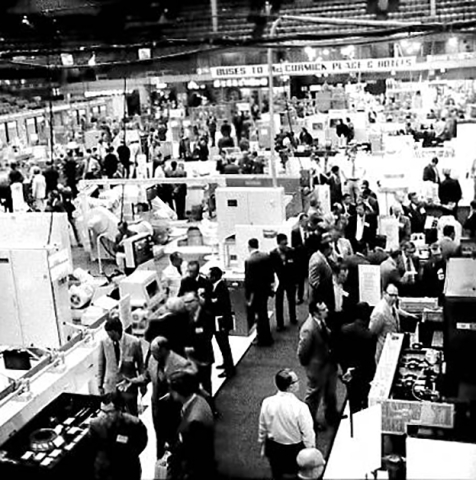 The first National Machine Tool Builders’ Exposition in 1927 featured so much equipment that a special transformer station had to be constructed to handle the 428 operating devices ranging from electric drills to
100,000-pound milling machines. More than 12,000 attendees streamed through the Cleveland Auditorium at that inaugural event.

The National Machine Tool Builders’ Association (NMTBA) launched the show with the commitment to bring new technology to the market and demonstrate the importance of manufacturing technology, both present and future. By the time the second show was held in 1929, there were about 200 new equipment items on display that amazed over 25,000 attendees, including those from industrial foreign countries like England, France, Belgium, Germany and Czechoslovakia.

During unsettled times of the 1930s and early 1940s the show faced several postponements and was only held once, the Machine Tool Show of 1935. But by the time the first post-war event took place in September 1947, it was once again a huge draw. That show also marked the first time the event was held in Chicago, at the Dodge Plant on South Cicero Avenue.

All machines that year were required to be painted the same shade of ‘machine tool gray.’ One show visitor recalled years later that the Cincinnati Milling Machine Co. (later Cincinnati Milacron) capitalized on this by introducing a new cutting fluid in bright pink and offering it to all exhibitors. The now-ubiquitous CIMCOOL® was a breakthrough at the time because it was the first synthetic fluid to combine the cooling capacity of water with the lubricity of oils, making high-speed equipment and better tool life possible.

In the 1950s and 1960s, the show was held at dual venues: the Machine Tool Exposition at Chicago’s International Amphitheater along with a Production Engineering Show at Navy Pier, and shuttles ran between the two locations.

The pace of technological change prompted the merging of the so-called ‘twin shows,’ leading to the precursor of what is now known as the International Manufacturing Technology Show (IMTS) at McCormick Place in
1972 (although the IMTS name wasn’t officially adopted until 1990). The focus that year also shifted from being simply about equipment to emerging technology – especially computerized – and non-NMTBA members were allowed to exhibit for the first time. This also marked the beginning of the standard two-year rotation that IMTS uses today.

Over the following two decades, the growth of IMTS kept pace with the ever-expanding McCormick Place, and the show now fills all four buildings. The introduction of product-specific pavilions in the 1990s completely
reorganized the show and provided an improved visitor experience. Today, IMTS offers 10 technology pavilions, ranging from Metal Cutting to Gear Generation to Additive Manufacturing (3D printing and fabrication).

“While the show has taken some turns in focus over the years, its original commitment to innovation, invention, and introduction remains the same and stronger than ever,” said Peter Eelman, Vice President of Exhibitions and Communications for AMT, the Association for Manufacturing Technology, producers of IMTS. “The show exists for inspiring manufacturers to act on what’s new by taking what they see and understanding how it might work for them. It’s a directional view that produces great leaps forward in manufacturing.”

In 2014, IMTS embarked on the most audacious publicity stunt since pink cutting fluid: the creation of a working automobile at the show. In collaboration with Local Motors, Oak Ridge National Laboratory, and Cincinnati, Inc., a 3D-printed electric car was assembled onsite during the six-day show. On that closing Saturday, Jay Rogers, CEO and Co-Founder of Local Motors, and Douglas Woods, President of AMT, drove out of IMTS in
the newly-finished “Strati” vehicle.

The 30th edition of IMTS in 2014 was the largest six-day version of the show ever, with 114,147 attendees representing 112 countries. The showfloor covered more than 1.282 million net square feet of exhibit space with 2,035 exhibiting companies, and ranked third on the TSNN Top 250 List. IMTS 2016 is on track to occupy 1.3 million square feet and welcome 120,000 visitors this September.

While it may have begun as a type of science fair for manufacturers, today’s IMTS is heavily influenced by the pace of technology, which continues to drive growth. “

Because the world’s leading companies exhibit the best-of-their-best, IMTS visitors can be assured … they’re gathering information not readily available at any other show,” Eelman said. “From an era discovering carbide tools to one embracing the Industrial Internet of Things, manufacturing history happens at IMTS.”

PCMA Names 2019 “20 in Their 20s” Honorees
The Professional Convention Management Association(PCMA) has cast its votes for the next generation of professional business event leaders. PCMA’s newest class of “20 in…
UFI Names Nick Savage New Regional Manager for Middle East-Africa Region
UFI, the Global Association of the Exhibition Industry, has named Nick Savage as the association’s new regional manager for the Middle East-Africa region. With his…
PCMA Unveils Their 2018 ‘20 in Their Twenties’ Class
The 20 in their Twenties program, supported by the Professional Convention Management Association Education Foundation and Visit Seattle, is designed to engage the best and…
IMTS 2014 Showcases High-tech Future of Manufacturing
The International Manufacturing Technology Show (IMTS) delivered on its theme, “come together, leave inspired” to more than114,000 attendees during the course of their show,…
Lack of Clarity on Illinois Openings Leads to IMTS 2020 Cancellation
As the trade show industry continues to be held in limbo in states that lack clarity around if and when shows could reopen, one of the biggest shows in the U.S. – IMTS 2020 (…
HANNOVER MESSE USA Set to Debut in Chicago at IMTS 2018
Deutsche Messe is gearing up to stage its first-ever HANNOVER MESSE in the U.S. market next year with HANNOVER MESSE USA, debuting Sept. 10-15 alongside IMTS 2018 at…