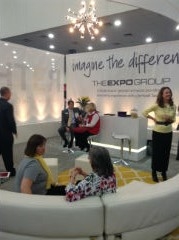 This year’s International Association of Exhibitions and Events’ Expo! Expo! Annual Meeting & Exhibition in Houston reflected the overall continued optimism in the trade show industry, with 2,047 trade show organizers and suppliers  flocking to the city for the three-day event.

There also were 250 exhibitors, representing destinations, general service contractors, event technology, transportation and many other supplier categories on the showfloor at the George R. Brown Convention Center in downtown Houston.

As the showfloor opened and crowds of people perused the aisles, IAEE Chairman Jason McGraw looked around and said, “There’s a really good feeling and overall optimism in the industry , a good buzz. That energy is translating here to the Expo! Expo! showfloor.”

That positivity also was reflected in not only the attendance numbers, but also the fact that exhibit revenues this year were up 16 percent and sponsorship revenues were up 26 percent, Dubois said.

“I had senior executive from a supplier company tell me there is a buzz at this event that hasn’t existed in a while,” he added.

The event kicked off the night before with a fireworks display over the George R. Brown CC, followed by a party filled with food and music.

The next morning keynote speaker Larry Winget, who is called the “Pitbull of Personal Development” and is a five-time Wall Street Journal/New York Times best-selling author took the stage.

He said he was anything but a motivational speaker, and instead, encouraged people to take personal responsibility in their lives and start enjoying themselves.

Winget also said that even though there were at least 500 books on the ‘secret to great customer service’ it was actually really simple: “Just be nice!”

The event was filled with education sessions, including CEM courses and overall topics that ranged from “The Next Generation of Female Leaders” to “Why Event Marketers Need to Think Like Content Marketers” to “Is the US Convention Center Model Broken”.

Every year, IAEE teams up with the Society of Independent Show Organizers for an invite-only session. This year’s session was moderated by dmg :: events’ Galen Poss. “The Social Community – Friends or Foes for the Exhibition and Event Producers.”

“I think (social media) is the most exciting and scariest thing that I’ve encountered in my career,” Poss said.

Among other important topics discussed, Marketing Design Group’s Kimberly Hardcastle-Geddes disagreed with the idea of having just one person dedicated to doing the social media outreach for an organization.

“Everyone should be trained on social media on your team,” she added. “It’s something that they should all have in their toolkit.”

Experient’s Shawn Pierce said that all events need to have a social media program. “This tool is a direct interaction with our community,” he added.

When Poss asked about measuring the ROI of social media, Maria Palombini from Summit Professional Networks said, “You really should be asking, ‘What’s the value of not having it? Do you want to be perceived as not being cutting-edge?’”

Looking into the future, Dubois said he was grateful to have the support and collaboration of the IAEE Board of Directors to be able to continue to evolve the organization through international expansion, offering more educational opportunities and overall membership support.

“We’re a $5 million business that were continually looking to grow,” he added.