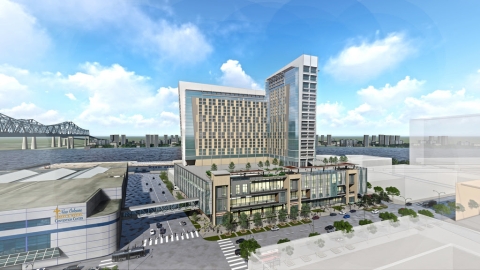 Matthews Southwest Hospitality, a national hospitality industry developer based in Dallas, released an initial conceptual design of the proposed headquarters hotel that would be attached to the New Orleans Ernest N. Morial Convention Center, giving the public a first glimpse at the proposed exterior of the $558 million addition to the city’s hospitality inventory.

“The design of the new convention center headquarters hotel has to be spectacular in order to deliver on its full potential and we are both excited and enamored with the initial design concept provided by Matthews Southwest,” said Melvin Rodrigue, chair of the Ernest N. Morial New Orleans Exhibition Hall Authority.

He added, We are very confident that the new hotel will be a catalyst for more new development and investment in an area upriver from the Convention Center and deliver vital new taxes to the City of New Orleans and State of Louisiana.”

Omni Hotels & Resorts operates several convention center hotels in the U.S., with the addition of 5,500 rooms since 2010 in markets such as Dallas: Nashville; Louisville; and Fort Worth, Texas.

Negotiations between the authority and the project team are in their early stages and are expected to be completed by early next year.

Jack Matthews, chairman of developer Matthews Southwest, praised the development team and spoke to the project’s transformative impacts, “Our team, working closely with Nunzio Marc DeSantis Architects, is committed to building a world-class destination hotel in New Orleans that will enhance the local community and create a new destination for its visitors,” concluded Matthews.

According to an independent analysis commissioned by the authority, the new headquarters hotel will begin generating an annual economic impact of $282 million, $18 million in new taxes for the City of New Orleans, $6 million for the State of Louisiana, as well as supporting more than 1,900 new jobs.

The independent analysis of the project concluded that the hotel would induce significant new room night demand and dramatically improve the occupancy of the exhibit halls on the upriver end of the convention center.

The pre-development terms are currently being established that will guide the formal negotiations.   The new headquarters hotel could be ready to welcome guests as early as spring of 2023

Ernest N. Morial Convention Center Reviewing Plans for New Development
The Ernest N. Morial New Orleans Exhibition Hall Authority is moving forward with its $557-million, five-year capital improvement plan. Approved in 2018, the plan includes…
New Orleans’ Ernest N. Morial Convention Center Launches Employee-Owned Innovation Lab
While many entities have been stumbling over major hurdles with employee retention and engagement throughout the COVID-19 pandemic, New Orleans’ Ernest N. Morial Convention…
Houston’s George R. Brown CC on Track for New Adjacent Hotel
Houston is on its way to a new hotel adjacent to the George R. Brown Convention Center, with an RFP being issued to find a team to develop and design the new property. The…
People News: BPA Worldwide, Ernest N. Morial Convention Center and More Tap New Leadership, Announce Promotions
As the trade show industry continues its evolution toward a post-pandemic future, event-related organizations across the U.S. and abroad are appointing new leaders, promoting…
Dallas Greenlights Plans for a New Convention Center
The city of Dallas, Texas, will soon have the ability to attract even larger trade shows and other events to its destination. According to Visit Dallas officials, the Dallas…
U.S. Travel Industry Releases Guidance for "Travel in the New Normal"
Taking a big step to chart a course forward, the U.S. travel industry submitted to the White House and governors a document containing detailed guidance for travel-related…