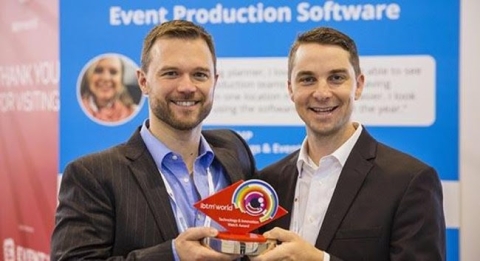 The 2016 ibtm world conference in Barcelona, Spain, was a good place to be for Orlando-based event software company, Shoflo, which walked away with the event’s coveted Technology and Innovation Watch Award for its event production software.

Presented in partnership with EventMB, and regarded as the most significant technology award for the meetings industry, the annual ibtm award recognizes innovators and talented entrepreneurs poised to revolutionize the meetings and events sector.

“It’s an absolute honor to receive this award from ibtm world and EventMB,” said Stephen Bowles, founder & CEO of Shoflo. “Shoflo is more than just a new software widget, we are changing the behavior of an entire industry for the better.”

He continued, “To win this prestigious global award at ibtm is such an encouragement and validation for my team, and the industry as whole.”

As a software platform designed specifically for event planners and production teams who have grown frustrated with spreadsheet-based, Excel-style printed workflows, Shoflo allows event teams to create and collaborate on show rundowns and schedules, and share documents in real time on any device. All edits save instantly and are seen by everyone immediately, keeping team members in constant sync.

Besides offering industry-specific features including custom column views and auto-tracking throughout the show, the easy-to-use digital platform also helps meeting planners and their clients achieve green initiatives by taking away the need to print production documents onsite. As a result, Shoflo also helps events save on paper and toner expenses.

Shoflo is used by events around the globe, ranging from large corporate conferences to small meetings, including events produced by creative agencies including Drury Design Dynamics and KBOgroup; sports teams such as the Orlando Magic, Charlotte Hornets and the Los Angeles Rams, and by production teams for Walmart, TEDx, Mary Kay and Church On The Move.

Established in 2000, the ibtm world Technology and Innovation Watch Award is the longest running of its kind and widely regarded as the most significant technology award for the meetings industry. The award is judged by a panel of international industry professionals in search of the next market-changing innovation that could revolutionize the meetings and events sector. Entries are scored based on innovation, completeness of concept and value to the meetings industry.

Winners are not only given the opportunity to showcase their technology and innovations within the ibtm world Innovation Zone, but also receive exposure to thousands of international industry attendees and the international media during and after the event. The 2016 international competition attracted a record level of entries, with many first-time competitors from Hong Kong, India, Tanzania, Turkey, Finland, Norway and Romania.

IBTM World 2017 Technology Watch Awards Recognize Outstanding Event Industry Tech Achievements
The ibtm Technology Watch Award winners for 2017 were announced at the most recent ibtm world, held Nov. 28-30 at Fira Gran Via in Barcelona, Spain. As the longest-running…
Last Call to Enter the ibtm world 2017 Tech Watch Award!
Technology companies with new products or services relevant to the meetings, incentive, conference and events (MICE) industry have until Sept. 8 to enter the ibtm world Tech…
IBTM World Announces 2018 Tech Watch Award Shortlist
The finalists for the 2018 IBTM World Technology Watch award have been selected. The shortlist comprises technology companies with innovative new products or services…
IBTM World Announces 2018 Tech Watch Award Winners
The winners of the IBTM World 2018 Tech Watch Awards were announced at the IBTM World event in Barcelona this week. Zenus and Fielddrive were the joint recipients of the Tech…
Best New and Upcoming Event Tech Sought for 2018 IBTM World Tech Watch Award
Judges are on the lookout for the best of new and emerging technology in the meetings, incentives, conventions and exhibitions (MICE) industry to be crowned the winner of…
ASAE Foundation Announces Five Innovation Grants Program Award Recipients
ASAE Foundation names the five awardees for the Innovation Grants Program (IGP). Each grant recipient will receive $10,000, and they will be recognized during ASAE’s 2018…