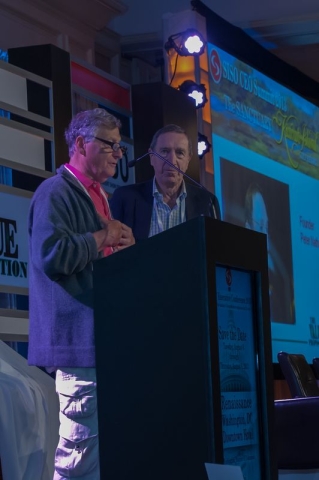 More than 20 years ago, 10 for-profit show organizers, including Michael Hough, Peter Nathan and Jason Chudnofsky, to name a few, got together and formed the Society of Independent Show Organizers.

This year marked a record for the organization when close to 300 attendees, including sponsors, guests and industry partners, gathered for the SISO CEO Summit April 8-11 at the Kiawah Island Golf Resort in South Carolina.

An even more impressive number, though, according to SISO Executive Director Lew Shomer, is the number of SISO members at the event, which also saw a big uptick from 130 to 166.

Many of those members arrived from more than 18 countries worldwide, he added, including new members from countries such as Columbia and Finland.

“I hope attendees are able to walk away from this event feeling like this industry is alive, vibrant and growing,” Shomer said. “We want people to ask questions, get answers and get content and contacts they can’t get anywhere else."

Besides several days of networking and educational events, one of the highlights was that Peter Nathan - not only a SISO founding member, but also someone who has been in the industry for 59 years and recently announced his retirement – received the Krakoff Award, named after trade show industry veteran Robert Krakoff.

Upon taking the stage to a standing ovation, Nathan said, “This has been a very overwhelming day for me. I am very, very appreciative.”

Earlier in the day, Nathan, along with other recently announced retirees from the industry - Nancy Hasselback from Diversified Communications, Nick Forster from Reed Exhibitions and Jim Bracken from Nielsen Expositions – were recognized at the event.

SISO CEO Summit kicked off April 8 with an opening reception, followed by a sit-down dinner at the resort.

The next morning started off bright and early with all of the close to 300 attendees standing up in the room and introducing themselves - a tradition that was started by founding member Hough.

The theme for the entire event was “The Value Proposition” and sessions throughout the day focused on providing value for both attendees and exhibitors.

The panel struck a chord with attendees. After hearing about how all three companies had created additional revenues, as well as value for exhibitors, the majority of hands went up in the room when attendees were asked whether they would consider rolling out a similar program.

Sally Shankland, CEO of UBM Connect, talked about value from the attendee perspective in the next session.

“If you are going to charge premium prices at your event, you better have your house in order,” she said.

However, he added, significant pick-up is expected for 2014 and 2015, with positive and accelerated growth during the long term, according to CEIR.

The rest of the day featured sessions ranging from mobile apps and why more shows should consider using them; the hosted buyer and crowd-sourced festival models; and Virgo CEO John Siefert spoke about the “Ladder of Engagement” philosophy in his company.

That evening featured an off-site event at Mingo Point with a bonfire and several stations of regional cuisine, followed by an Afterglow reception back at the resort.

Just a few of the current issues he pointed out included the ongoing immigration debate in the U.S., overall budget concerns, TSA, FAA and customs, among others.

Besides the pain points, though, Verdery said there was optimism that the U.S. will continue to work toward making it easier for international travelers to enter the country.

The final two sessions of the events were “Understanding the Value of Emerging Markets, a SISO/UFI Joint Session” and “Market Smackdown: Strategics vs. Financials. Resizing the best value for events companies.”

The rest of the day people had the choice of taking part in several activities, such as golf, sailing and croquet, with one more dinner and reception.

Next year’s event will be held March 30-April 1 at the Four Seasons in Las Vegas.