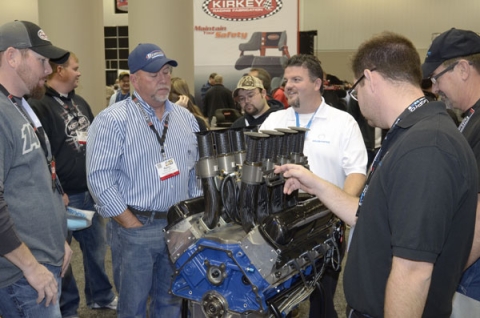 In March, the Specialty Equipment Marketing Association bought the Performing Racing Industry Trade Show, and now it’s expanded its reach even more, with the acquisition of the International Motorsports Industry Show, held annually in Indianapolis.

The two motorsports shows will be combined in the process.

“This consolidation is all about helping the racing industry to succeed,” said SEMA President and CEO Chris Kersting.

He added, “Unifying the racing industry’s trade shows makes it more affordable for all to participate and allows us to focus on providing the greatest value and benefits for the racing segment. Look for the association to be adding resources and services to help participants get maximum value from the PRI Show in Indy.”

IMIS, which was just launched a few years ago, will be collocated with PRI, on tap Dec. 12-14, 2013, in Indianapolis at the Indiana Convention Center.

“The racing industry needed to have just one motorsports trade show in the U.S. I’m proud to say we’ve accomplished that,” said Scooter Brothers, SEMA chairman of the board of directors.

He added, “We have all worked toward a common goal, and have succeeded on behalf of the industry. To have a single home for the racing trade show is clearly the best thing for the industry, and working together with Chris Paulsen (co-founder of IMIS), we got it done.”

The IMIS and PRI shows will remain as is for 2012, with PRI taking place Nov. 29-Dec. 1 in Orlando, and the IMIS event scheduled Dec. 6-8 in Indianapolis.

“We formed IMIS in 2009 to bring a hardcore racing tradeshow back to Indianapolis,” Paulsen said.

He added, “We grew a lot faster than we ever could have dreamed of, and we couldn’t be happier that a hardcore racing tradeshow will remain in Indianapolis for years to come. SEMA will be great stewards of the hardcore racing industry and I couldn’t be more pleased that Indianapolis will remain the center of motorsports both on and off the track.”

Tony Stewart, three-time NASCAR Sprint Cup Series champion and co-founder of IMIS, added, “Being from Indiana, having a hardcore racing trade show in Indianapolis was very important to me. … I know SEMA will do a great job to make sure Indy remains the place for hardcore racing.”

The 2013 PRI Trade Show will be organized and produced by the PRI team based in Laguna Beach, Calif., with John Kilroy at the helm as vice president and general manager.

The show previously was held in Indianapolis before it moved to Orlando.

“We are excited to bring the PRI Trade Show back to Indianapolis, where exhibitors and buyers experienced six very successful racing industry trade shows, from 1998 to 2004,” Kilroy said.

He added, “Chris Paulsen, Jeff Stoops, Tony Stewart and the entire IMIS team have done an excellent job starting up a new racing trade show, and we promise to build on their mission to keep Indianapolis the annual epicenter of new racing technology.”