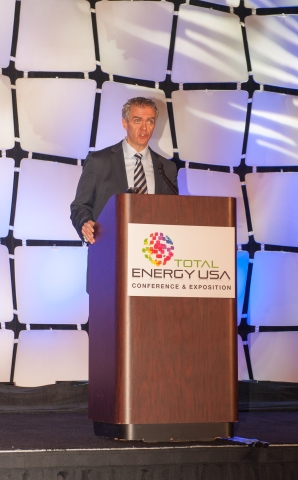 Instead of representing one particular energy sector, Total Energy USA touched on several of them, such as ­ fossil, nuclear, renewables and cross-cutting sectors like energy-efficiency.

The three-day show that showcased more than 75 speakers, 9 keynotes and 25 educational sessions, addressing a wide spectrum of topics, as well as a 14,000 net square foot showfloor, is the brainchild of Vinnie Polito, managing director of VP International.

“We are not trying to just be a wind show or an oil and gas show,” Polito said. “We want to discuss the places these things intersect. We want this to be a place for provocative and open dialogue.”

The show is a unique collaboration between VP International and the Greater Houston Convention & Visitors Bureau, with the bureau owning a minority stake in Total Energy USA.

“We wanted to find shows that we could launch that were in the economic demographics of the community,” said Greg Ortale, president and CEO of the bureau.

Total Energy USA isn’t the only show the bureau has helped launch, it started out giving loans to consumer shows to come in and fill need periods in the city.

“We are working with a couple of more shows that are pending,” he added, though the new deals will involve trade shows.

As far as how the Total Energy USA show came to be, Polito said he visited Reed Exhibitions’ All-Energy show held in Aberdeen, Scotland, which is a similar model to Total Energy USA, and realized the U.S. market was in need of a show that also addressed the entire energy sector.

In a short, 18-month period of time, Polito started work on creating the show from scratch, hiring a team, selling exhibits and sponsorships, putting together an advisory board, bringing on Technology Transition Corp. to program the robust conference program and everything else needed to launch the show.

Two big name sponsors – Shell and NRG – also threw their weight in back of the show, signing on for a 3-year and 2-year sponsorship, respectively.

In addition, more than 20 associations, several sponsors and media partners, including U.S. News & World Report and the Houston Business Journal, came on board to support the show as well, Polito said.

By all accounts, attendees and exhibitors both gave the debut event positive reviews, praising the model of bringing all of the energy sectors together in one place.

“I think this event is great,” said Attendee Catherine Dunwoody, executive director of the California Fuel Cell Partnership. “Bringing together a diverse group of energy sectors is absolutely essential to how we are going to solve our energy issues.”

Exhibitor Melinda Allen, who represented the Economic development Corp. of Lea County, N.M., also said her organization supported the idea of the total energy package and having different sectors working together.

“So far, the show’s been really great,” she added, “We’ve had a lot of good traffic with people interested in what we do. I (also) think the sessions have created a lot of conversations.”

Both Polito and Ortale emphasized that the main purpose of the event is to provide high-quality content to represent the entire energy spectrum.

“Or focus this year wasn’t about selling exhibits, it’s about developing a strong conference, and they will come,” Ortale said.

The conference had several leaders not only in their respective energy fields, but also the mayor of Houston, Annise Parker, spoke about “City Leaders Who are Shaping Energy Generation and Use”, and Jonathan Kraft, president of The Kraft Group and the New England Patriots, spoke on a panel about “Energy Production and Efficiency in Buildings.”

“Success for me is the content is well received and that it builds a foundation for next year,” Polito said.  “I hope that everyone here will go home and tell two friends about it.”

HANNOVER MESSE USA Set to Debut in Chicago at IMTS 2018
Deutsche Messe is gearing up to stage its first-ever HANNOVER MESSE in the U.S. market next year with HANNOVER MESSE USA, debuting Sept. 10-15 alongside IMTS 2018 at…
SpaceCom Launch in Houston Draws More than 1,700 Attendees
The first annual SpaceCom (Space Commerce Conference and Expo) drew more than 1,700 professionals, representing the aerospace, financial, energy, medical, maritime, satellite…
ITE Group Profits Down, Positive on Asia
U.K.-based exhibition organiser, ITE Group, reported profit attributable to equity holders of US$53 million (£33.9 million) – down slightly compared with US$54.3 million (£34…
Making a Positive Impact is Par for the Course at NACS
This article is the first in a series that TSNN runs throughout the holiday season shining a bright, well-deserved spotlight on event companies that are #GivingBack to make a…
Ernest N. Morial Convention Center Reviewing Plans for New Development
The Ernest N. Morial New Orleans Exhibition Hall Authority is moving forward with its $557-million, five-year capital improvement plan. Approved in 2018, the plan includes…
Eventerprise 5.0 Enables Reviews and Quotes to Connect Event Planners and Suppliers
Eventerprise, a digital event platform that connects event organizers with event suppliers, including products, services, planners and venues, has released a new version of…