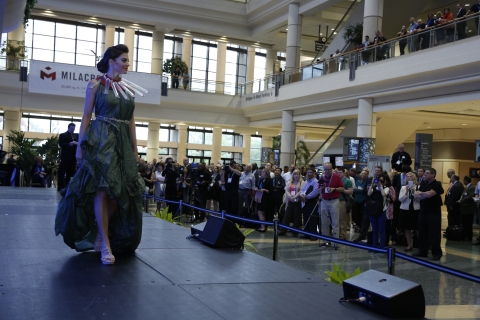 The plastics industry was still in its infancy when the first National Plastics Exposition (NPE) opened its doors in April 1946 at the Grand Central Palace in New York.

The Society of the Plastics Industry (SPI) was founded in 1937. Organizers realized industry professionals needed a place to meet face-to-face and discover the latest technology in real-life machinery, materials, and processed goods all in one place at one time. So once World War II ended, the opportunity to demonstrate equipment operating in front of an audience of thousands became a reality.

That first year, there were 164 exhibitors, mostly in 10-by-10-foot booths, totaling 24,600 square feet on two floors. All of the exhibitors were from the U.S. At the 2015 show, one exhibitor (Milacron) had a booth that was larger than the entire first showfloor.

During the early years, the show changed from an annual to biennial schedule and rotated between Chicago, New York, Philadelphia and Cleveland. In 1971, Chicago became the home for NPE, which officially switched to a triennial schedule in 1973. By that point, there were many machines – and even entire production lines – operating on the showfloor, as they still do today. At the 2015 show, more than 400 exhibitors featured operational machines.

“Both NPE and the plastics industry have changed dramatically since that first event,” said Mark Garrison, senior vice president of Membership and Business Development for SPI: The Plastics Industry Association. “The NPE program has kept pace with the growth and innovation in plastics as a whole – it’s still the best place for plastics professionals to get up-close and personal with plastics machinery while it’s working at full production capacity on the trade show floor.”

The show, which relocated to Orlando in 2012, has also become a fully international event. At NPE2015, nearly 44 percent of the 2,029 exhibitors came from other nations, along with 26 percent of the 65,810 registrants.

Over the decades, NPE has been a mirror of American culture and history. At the 1958 show in Chicago’s International Amphitheater, high-density polyethylene (HDPE) made its debut, most prominently featured in Wham-O’s 3-foot diameter Hula Hoops. Thanks to exhibitor giveaways, there were lots of Hula Hoops – and lots of Hula-Hooping – all around the showfloor.

On the final day of NPE at McCormick Place in 1963, shortly after 12:30 p.m. CST, news broke that U.S. President John F. Kennedy had been assassinated. Word spread rapidly across the showfloor and doing
business no longer seemed appropriate. The show closed far ahead of the scheduled 6:00 p.m. closing time.

NPE2015 was a milestone in the show’s 69-year history, and not just for breaking records in the number of exhibitors, attendees and space (1,128,200 net square feet). There was also the debut of the Zero Waste
Zone, a special area focusing on the industry’s mandate to reduce, reuse and recycle plastics. The Zone featured recycling demonstrations, products made with post-consumer recycled materials, and several special events.

A Pursuing Zero Waste Fashion Show was held at the show opening, featuring clothing designed by students from the Savannah College of Art & Design and made from recycled or reused plastics. The fashions were then on display in the Zero Waste Zone.

Surrounding the Zone was a Sustainability Pavilion featuring technologies that benefit the environment, and the Recycling Pavilion which hosted recycling technologies. But the recycling efforts didn’t end with the displays. NPE exhibitors teamed up to recycle 87 percent of the 518 tons of waste generated on the show floor.

Much of the success of NPE can be attributed to the industry involvement in planning and implementing the event. Members of exhibiting companies serve on the NPE Committee, which works in tandem with SPI’s trade show department and the show’s management firm to produce each show. NPE2015 was Np. 7 on TSNN’s Top 250 Trade Shows list.

UBM India Successfully Concludes a Decade of Fi & Hi in India
Fi & Hi India 2015, organised by UBM India, was held from 19th to 21st October 2015, at Bombay Convention & Exhibition Centre (BCEC) in Mumbai. Fi & Hi India,…
SEMA Show Still Cruisin' After Five Decades
Fifty years ago, about 2,000 attendees and 80 exhibitors gathered under the grandstands at Dodger Stadium in Los Angeles for the first Speed Equipment Manufacturers…
How to Tell If Your Audience Is Engaged
Two event organizers walk into a room and scan the audience. Upon leaving the room, the first event organizer says, “No one is engaged. They are all texting and reading…
10 in 10: Technologies That Changed Trade Shows Over the Last Decade
Last month, Core-apps celebrated its 10th anniversary as a company. While a decade of success is a proud accomplishment for any company, it might as well be 100 years in the…
Seven Apps to Make You a Webinar Rock Star
If you oversee your company’s webinars—from promoting and execution to follow-up—have you ever wondered how you could do your job faster, generate more buzz and do it all…
Seven Ways to Use Mobile Messaging at Your Event
Coordinating trade shows and exhibitions come with their fair share of challenges and one of them is how to best engage attendees. Did you know that messaging apps are used…