Puerto Vallarta: The Friendliest City in the World 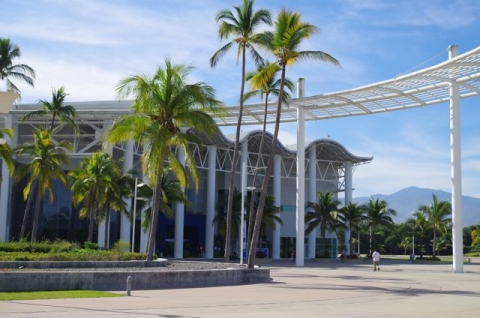 The Puerto Vallarta International Convention Center in Mexico is just four and a half years old, but it already is making a name for itself in the international event community.

For the past three years, it has been recognized in MDC Magazine Readers Choice Awards as one of Mexico's top 10 convention centers. This year, it was No. 3 on that list.

While speaking outside the building to Patricia Farias-Barlow, CEO ‎at PVICC, a hawk was seen flying overhead. “That’s Harry,” said Farias-Barlow. “He was adopted by us, and he’s not completely wild.”

PVICC is the only convention center in the world adjacent to a Natural Protected Ecological Area. The 320 acres of naturally protected area are maintained by revenue from events at the convention center. Itis an area that is vital to the ecology of Puerto Vallarta and the bay.

Farias-Barlow said that the PVICC is focused on attracting conventions and corporate meetings of 2,200 attendees and below.

PVICC is equipped with 160MB free Wi-Fi. For events requiring a more advanced solution, a fiber optic network has been installed in the facility and events need only pay for the link.

Farias-Barlow said the center is set up to service events with infrastructure needs at a very low cost. “We decided we are not here to make money on the Internet,” she added.

The Holiday Inn Express, which opened in the fall of 2013, with its proximity to the airport and the convention center, would make an excellent command center for event organizers.

The hotel has a sleek modern design, light filled rooms, ample meeting rooms and a restaurant and bar adjacent to the hotel is scheduled to open later this year.

Puerto Vallarta was dubbed “the friendliest city in the world”, and once you’ve been there, you’ll see it is a claim that’s hard to argue with.